Home School History of the school

History of the school

Subotica Music School was established by the Town Council in 1868. It was a part of the local grammar school and there were three departments: Singing, Violin and Cello. Each department had its own lead teacher: Vince Souschek, Géza Allaga and Leonhard Barbaro. The Wind Department was opened in 1874.

The first teacher with a degree was Ferenc Gaál, who had been the Head of the institution from 1 October 1882 until his death. He was an excellent pianist and acknowledged expert. He opened the Piano Department in 1890. 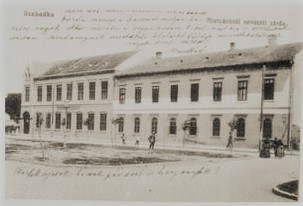 In 1907, Ernő Lányi became the Head Teacher. He had already had rich experience as a performer, pedagogue and organizer. He was well known in many European cities. He established the music library, score library and provided new musical instruments. In 1914, during his office term, Music School moved to the Hungarian House in Strossmayer Street, where it is still situated. He established the Subotica Philharmonic Orchestra in 1908, which boosted the town’s music life and attracted world renowned artists such as Béla Bartók, Pablo Casalst and many more.

After World War I, Subotica became a part of the Kingdom of Serbs, Croats and Slovenes, and Music School was run by Cvetko Manojlović. He started his music education in Subotica and graduated in Leipzig. He established the first Serbian music school with Binički and Mokranjac in Belgrade in 1899, where he became the first famous piano teacher in Serbia.

After Cvetko Manojlović retired from the office, Hermann József, a violin teacher, took over his role. During the Second World War, the new Head was Szemlér István, who received his university degree as a violin teacher from the Academy of Music in Budapest.

Following the war, the first Head Teacher was Straka Dezső, whose role was passed on to Milko Cora (born Pataki) in 1947.

After the Second World War, music life in Subotica was rich and the Music School played a vital role in the events, as it organised most concerts in the town. Besides music education, students could learn ballet and acting as a part of opera studies. (As a result, the students were able to perform almost the entireNikola Šubić Zrinski opera by Ivan Zajc to celebrate the 80th anniversary of Music School, on 31st March 1948.)